On Thursday, September 30, Mr. Luc-Alain Giraldeau, CEO of the Institut national de la recherche scientifique (INRS) and Professor Hélène Belleau, Director of the Centre Urbanisation Culture Société, invited members of the INRS community and the general public to take part in an event titled Students at the Heart of the INRS Vision.

This two-part event included a round table discussion on the theme Montreal, Student City: Dynamics and Challeges of Renting and was followed by the J.A. DeSève Scholarships Award ceremony.

The round table was moderated by INRS graduate Cécile Poirier (Housing Services, City of Montreal) and featured Professor Nick Revington and doctoral candidate Amel Gherbi, both specialists in urban development studies, as well as Andrée-Anne Lefebvre, coordinator at UTILE, a non-profit organization focusing on managing the housing needs of the Quebec student population. The three participants had the opportunity to share their research findings and field experience, and to discuss the challenges and options for Montreal.

The round table was followed by a ceremony to honour the ten recipients of the J.A. DeSève Excellence Scholarships. Élise Comtois, Director of the INRS Foundation, introduced the students as well as their master’s and doctoral work. The official presentation of the scholarships was preceded by  inspiring words from the Secretary General of the J.A. DeSève Foundation, Mr. Guy Dufort.

The perseverance and success of the recipients were warmly applauded. To close the event, Mireille Zoa Ngoyene, a doctoral student in population studies, gave a moving testimony on the mobilizing impact of receiving a recognition such as the J.A. DeSève excellence scholarships.

Thank you to everyone who took part in this event, either in person or virtually, that celebrated expertise sharing and our students’ success. Wamest thanks to the Fondation J.A. DeSève and again, congratulations to our recipients! 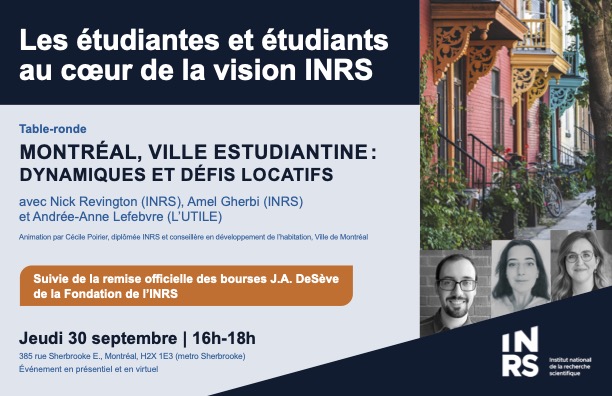